Harris Environmental conducted archaeological surveys of four project areas in eastern Oregon for the U.S. Army Corps of Engineers Portland District, in order to support the agency’s responsibility for NHPA Section 106 compliance. Fieldwork and reporting followed Oregon SHPO standards. The project areas consisted of 2,960 acres of drawdown zones of the Fall Creek, Fern Ridge, Detroit Lake, and Willow Creek Reservoirs, located in Lane, Marion, and Morrow Counties. The reservoirs were drawn down to expose areas not previously surveyed for cultural resources. Topography of the project areas varied from flat open valleys to steep ridges bordering creeks and rivers, with surrounding coniferous forests. Crews regularly trudged through deep muds to complete the project field work. As the result of survey, 57 new prehistoric and historic archaeological resources and 49 previously recorded sites were documented and evaluated. The survey identified an extensive history of human occupation in the project areas from the Archaic period through the mid-twentieth century, with many resources related to trade and transportation in the area. Some of the resources recorded included a probable Archaic stemmed point, a wide-stemmed projectile point resembling the Borax Lake Cluster from Northern California, a section of the Oregon Pacific Railroad, and an early twentieth century transmission line. The survey areas also contained evidence of heavy logging activity that occurred prior to the construction of the reservoirs. Four technical reports were prepared for this project with a short turnaround time. 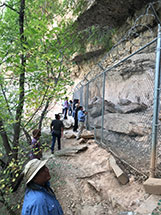 Harris Environmental provided Subject Matter Expert services in cultural resources to Customs and Border Protection Facilities Management and Engineering Office. This complex project required us to provide a team of qualified environmental SMEs in cultural resources, environmental planning, and project and program management. This project demanded a thorough understanding of the cultural issues associated with the actions the agency proposed to undertake and a comprehensive understanding of federal, state, and local regulatory requirements. We completed 28 different task orders along the U.S.– Mexico and U.S. – Canada International Borders, many under hazardous conditions (remote and rugged country, under threat of violence from smugglers). Tasks included NRHP eligibility evaluations; cultural resources inventories; documentation of historical facilities; preparation of monitoring plans and monitoring construction areas; and developing National Environmental Policy Act documents. We worked on multiple projects at one time, each with a different project manager and each with a fast-paced deadline. We prepared reports for each task and navigated them through federal regulatory review and state SHPO review. All project objectives were met within our established schedules and budgets.

In addition, our experience includes numerous electrical co-operatives throughout Arizona. For these, we have conducted natural and cultural surveys/compliance reports.

Harris Environmental provided project supervision to ensure compliance with the construction contract and associated environmental protection measures for the hardrock closures at Coronado National Memorial, Saguaro National Park, Grand Canyon National Park, and Organ Pipe Cactus National Monument. Biological monitors were present for construction activities at all mine features, and an archaeological monitor was present during ground-disturbing activities associated with closure of mine features listed in or eligible for listing in the National Register of Historic Places. We were responsible for ensuring minimal impacts to cultural and natural resources, and that applicable mitigation measures were applied/as well as the appropriate closure method. Work was conducted in remote and rugged areas which required long hiking and, at some mines in the Grand Canyon, helicopter use. Also, for two of the park units located near the U.S./Mexico International Border, we worked with armed escorts for safety.

Harris Environmental completed archaeological surveys, archaeological site assessments, archaeological site evaluations, and data recovery excavations at Joint Base Lewis-McChord (JBLM) in Pierce and Thurston counties, Washington. Archaeological surveys covered over 600 acres, including ten previously identified archaeological sites, which were selected due to impact from known previous or potential effects of military activities and maneuvers. Archaeological survey included subsurface testing in the form of shovel test probes. Six new archaeological sites were recorded as a result of the survey. The majority of the sites investigated were historic period sites, which required extensive research into the property ownership history and genealogical research on the families and individuals who occupied and created the sites. Archaeological resources investigated were associated with the Hudson’s Bay Company and the Puget Sound Agricultural Company, historic homesteads, the early logging industry in western Washington, historic schools, and historic military activity, including training areas, parade grounds, and a Vietnam mock village. Data recovery investigations were carried out at a late 1800s homestead site, because future military disturbances at the site cannot be avoided. A research design was prepared to guide excavations. Excavations were carried out over a 3-week period and included the excavation of 100 shovel test probes and 29 1-by-1-meter test units. All surface diagnostic artifacts were collected, as well as all subsurface artifacts. Artifacts were analyzed and cataloged by Harris Environmental and prepared for long-term curation. A comprehensive report was prepared to document the archaeological investigations findings.

Harris Environmental completed Class III cultural resource inventories for a proposed BLM invasive species eradication program in Navajo County, Arizona on 3,335 acres. Archival records from AZSITE and the BLM revealed that the project area had not been previously surveyed. Fieldwork identified 56 new sites within the survey areas, most of which are prehistoric. Several sites were large prehistoric habitation areas with Puebloan room blocks and extensive artifact scatters. Historic sites showed a history of ranching, which continues to this day. All work met Arizona State Museum, BLM, and Arizona State Historic Preservation Office Standards. Sites were carefully documented, their conditions were assessed, and they were evaluated for eligibility for listing on the National Register of Historic Places. Some sites displayed evidence of vandalism, with looters holes inside room blocks. Harris Environmental’s final report included documentation of all aspects of the project and its results, as well as recommendation to the BLM for future management of cultural resources.

Harris Environmental supported the U. S. Forest Service’s Santa Fe National Forest’s development of a plan for motorized trails on the Pajarito Plateau north of Los Alamos, New Mexico. The area was previously surveyed in the 1970s and 1980s by the Pajarito Archaeological Research Project of the University of California, Los Angeles. Harris Environmental relocated and mapped sites using high precision GPS. Of particular interest was the complex of Coalition Period (AD 1200 to 1325) fieldhouses and large pueblos scattered across the plateau/canyon landscape. We also investigated evidence of historic use of the area beginning with Hispanic homesteads in the late 1800s and early 1900s and the remains of Forest Service facilities during this same time period.

Harris Environmental performed an inventory of historic properties that are associated with the history of the African-American community within Pasco, one of the Tri-Cities in Franklin County, Washington. The history of this community is largely tied to the influx of African-American workers to the nearby Hanford Nuclear Facility in the 1940s and 50s, when thousands of temporary workers migrated to the Northwest and a vibrant community was established in East Pasco. Harris Environmental, along with the City of Pasco and project proponents, conducted a public meeting to select properties, which included:  churches, a community park, a bridge, a commercial business, and residences. We undertook an intensive-level survey, which included documentation through photographs and notes on the structures’ appearance, construction and integrity, using resources at the city, county and state level, along with oral interviews with community members. Historic Property Inventory (HPI) forms were created and recorded with the Washington State Department of Archaeology and Historic Preservation (DAHP). Our research will be used to complete nominations of select properties to the National Register of Historic Places (NRHP) and to document this important aspect of the city’s history. The project was featured in the local news:
https://www.tricitiesbusinessnews.com/2018/08/historic-sites